How I became theTravelsketcher

Posted on November 1, 2018 by Terry Christopherson

Twenty-five years ago, this coming January, I boarded a plane at SEATAC airport headed to Racine Wisconsin. Prior to that I had been to Mexico twice, and flights for business in the Western States – a business traveler yet not the road warrior I would become. My life as a seminar speaker was just beginning, hoping that the dream I had held for so many years would actually come true. Excitement and a lot of trepidation accompanied me on my way to the Racine Holiday Inn where I was to conduct my first seminar for Fred Pryor Seminars – “Management Skills for the Technically Trained.”

A few months later Pryor called with an urgent request, could I rush my passport application? My first passport. They needed a speaker to go to England to cover for another speaker, I don’t remember why. I had never been off the continent, I was going to Europe; fear and trepidation booked passage again.

Not long after that excitement, my weekly Fedex packet brought an itinerary with names of cities and states that I did not recognize at all. Slowly it dawned on me that these were cities in Australia, I was speechless. Never in my wildest dreams was Australia a place I expected to visit. Little did I know that I would go there well over 20 times in the coming years.

Over the last 25 years I have done seminars in Asia, South Africa, multiple trips to the United Kingdom and Australia, and most every State in the USA. Thanks to the gift-of-gab I became a world traveler, a designation that I am both proud of and for which I am grateful.

My first real sketch was in fact a travel sketch. We were staying at the Turtleback Farm Inn on Orcas Island in the San Juan Islands. Sketching was something I had wanted to do for a long time, with even a few less than stellar attempts along the way. Tricia, my wife, is the most encouraging person in my life, my biggest supporter. She encouraged me to find an art store on the island and buy a sketchpad and pencil. I sat in front of the fireplace and sketched; mercifully I have no idea where that sketch ended up.

Hear are two of those early sketches. The first is from a trip that Tricia and I took to Hawaii in 1989 when I was still in sales. The second is what I believe to be my first international sketch, 1997 in South Africa. 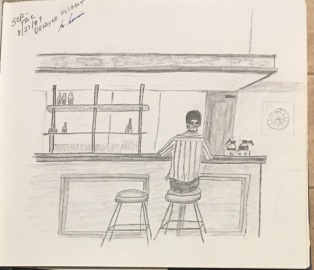 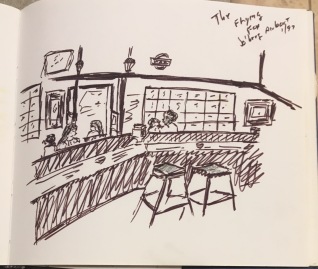 I began sketching and painting with acrylics on canvas. I remember sketching in the Johannesburg airport, the town square in Cape Town Africa, and at Sydney Harbour in Australia. Then, for some reason, I laid down my pen for a few years, thankfully not forever. Eventually I would show work in the Edmonds Art Walk in Edmonds, Washington, and at wineries in Woodenville, Washington. People bought paintings and even a couple of commissions came along.

Today I am grateful for the Mukilteo Beacon Newspaper which runs a little “Travelsketcher” column two weeks a month featuring my  sketches. I am thankful to those who commission me to turn a photo from their trip into a travel sketch for them; it is as if they share a bit of their experience with me, I trust the sketch brings back memories for them.

Sketching has allowed me to meet so many people, curious and usually too generous with their compliments. Tricia started getting me “Artist Trading Cards” a few years back, 2.5” x 3.5” blank watercolor papers, for quick sketches and paintings. I carry those with me always, sketching gifts for people I meet, flight attendants, and servers; a simple gift that always brings a smile.

In the near future there is plein air painting, and workshops to teach people how to travel sketch. And of course as much travel as possible.

Last week was pretty much my last flight as a seminar speaker, so I have now made the  transition from speaker/travelsketcher to just theTravelsketcher, it feels so right.

I sketch, I paint, I travel and eat, that is what my sites are all about.
View all posts by Terry Christopherson →
This entry was posted in Tips for the Travel Sketcher and tagged travel, travelsketch, travelsketcher. Bookmark the permalink.

2 Responses to How I became theTravelsketcher